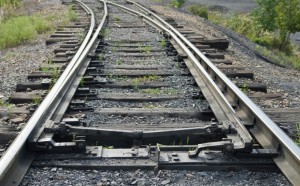 Countless members of the rail team are working their socks off in order to get the Dawlish rail way line back up and running by the expected opening date, 4th April. A worker from Rhondda Valley, Lee Haberfield took a pause for a moment in the effected spot that has recently earned itself an ominous name as “the hole”. Mr Haberfield has been working extremely hard and putting all of his efforts into the project along with his co-workers. This team of hard workers have advanced over the past few weeks so much so you can see a distinct difference in the railway line compared to what it looked like when the storms had taken their toll a few months ago.

South Devon is just one of many areas that Network Rail has concerns about because a grand number of 300 sections have also been drenched in water this year alone and the cost that has been estimated to renovate this damage is said to be around £170 million. Over the coming years treacherous weather has become an increasingly common factor and various associations including the Institution of Mechanical Engineers are bidding for a rethink towards how susceptible infrastructures are protected. However, the main objective at present is to get the main line of the South West opened up to members of the public as quickly as possible.

Even though worke has been progressing well  there are fears that something else could go wrong. The sandstone cliffs that lie directly above the line in Teignmouth have become increasingly unstable. A visible crack has formed over recent weeks, resulting in mass amounts of materials being removed but despite these obstacles, Network Rail are still adamant that work on the line will be completed by the set date in April. An agent for construction contractor Amco, Chris Warburton stated; “he loves the job, despite having been separated from his family in Cheshire for long periods over the past month, it's a privilege to work on a line that was created by one of the greatest engineers of all time. Brunel's work has lasted 150 years. We just hope that ours lasts another 150."

At present there are around 300 workers that work on the line each day, this includes 100 people overnight. The workers have to complete both technical and physical tasks from repairing cables to placing down parts of the track and making sure that they are securely fixed down. Many tasks have to be completed by hand because the ground around the track is extremely fragile and to brittle to bare the weight of machinery upon it.

The South West railway line has been the most widespread transport story to date because the line effected is a main travel route into many seaside resorts and without it, many towns would struggle to make ends meet. Without this railway line commuters would be unable to travel to and from many destinations because of the damage that the storms caused on the 4th and 5th of February. Lee added; “You'll always be able to look back at this and say you were there and you helped fix it”.

The workers dispersed to help re build the main Dawlish line, also known as the infamous “orange army” are working day and night to fix the gaping hole that had been left in the surrounding wall. This particular section had been a mainline from London that leads into the South West of Britain and the team had been assigned to fix not only this section but many other small breaks within the line along the 3.7 mile stretch of track. The part of the track that was damaged the most following the outrageous weather was at the seaside town of Dawlish where waves driven by high speed gales pulled down the supporting wall and left the rail line dangling in mid-air, resembling a type rope bridge almost.

The operator and owner of Britain’s railway infrastructure, Network Rail stated that they anticipate the line to be opened again around the 4th of April. This news came as a great relief to many residents surrounding the railway line whose everyday lives have been majorly disrupted by the lack of railway transport. The repair work that is taking place on the line is set to cost around £15 million as a whole and in the first days of the storm, officials came up with any ideas they could implement to try and stop the sea water demolishing any other parts of the sea wall and these ideas included:

However, failing to whip these ideas into motion the “Valentine’s Day storm” gushed in and washed away another large section, consequently resulting in the wall being closed until April. For businesses in West Devon and Cornwall, the lack of commuters has been a major threat to their livelihoods because large sums of money have been lost each day. It has been estimated that Plymouth City is losing around £5 million a day because the railway line has closed.

Following the above ideas, state-of-the-art engineering has come to a fearless rescue and produced a unique strategy to help start off the reconstruction.  Tis involved using a series of concrete motorway crash barriers acting as two frames, each would then be filled with concrete measuring up to the height of the existing track enabling workers to start work on the project. Network Rails managing director, Patrick Hallgate said; “An unfortunate event like the one experienced at Dawlish shows how important the railway is to the region's people and its economy," he also stated; "I hope our efforts to restore here show how seriously we treat that responsibility.

Could Dawlish be on the definite road to recovery?