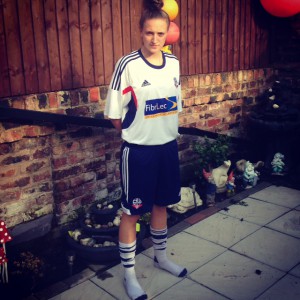 Pali HQ’s very own Gillian Herring has recently been offered a contract with Bolton Wanderers Ladies.

Gillian works as a Search Agent at Pali HQ in Wallasey. Pali Ltd (Property and Land Information) was formed in 1999 to provide a one stop shop for the supply of conveyancing searches and other property related reports anywhere in England and Wales to solicitors and conveyancers at a very reasonable price. The founding directors still play a central role in the day to day management of the business and have been steadily building around them a strong team of knowledgeable, motivated and skilled individuals. Gillian joined Pali in December 2012 as a trainee Search Agent.

Whilst playing at Wallasey Wanderers, Gill was given the opportunity to play at St Georges Park (The home of England) where she played a Futsal tournament and had a tour of the grounds.

The Bolton Wanderers teams (First and Reserves) compete in the North West Women's Regional Football League and the Lancashire Ladies League. They currently train and play home matches at the Bolton Academy. Within the season they will travel to numerous clubs including Blackburn, Blackpool, Wigan, Preston, Chester, Burnley, Northwich, Manchester and Crewe.

Well done Gill from all at Pali!

Gill isn’t the only up and coming sporty star from Pali HQ! Keep your eyes peeled for more blogs on Pali’s talented employees!