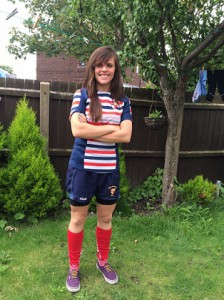 Nicole Cran from Pali HQ has recently been recruited to play for Birkenhead Park Ladies Team.

Pali (Property and land Information) is a national Conveyancing Search Company and has been providing the legal profession with quality Conveyancing Searches since 1999. Head Office, where Nicole is based, is in Wallasey on The Wirral.

Nicole started out by playing a mixture of contact and touch rugby and participated in the sport during school P.E lessons. Having played the odd mixed touch session during recent months, it had rekindled her love for the sport and recently Nicole has been fortunate enough to be recruited to play for Birkenhead Park Ladies team. Nicole has also been successfully signed up to the RFU just in time for the season which is due to start in three weeks’ time.

Nicole has been told she has a natural ability for the sport!