Pali – Property And Land Information has been supporting Steph Lyke and her two sisters with fundraising events for the past three years.

Steph Lyke from BBH Legal Services has organised an annual charity event for the last fifteen years, focussing on a different charity each year. This year Steph and her co-fundraisers decided to raise money for the By Your Side Appeal (http://byyoursideappeal.org/), a charity set up to support people living with cancer from diagnosis to post treatment care, across North Wales.

Pali was honoured to support the event as we are always happy to help charitable causes where possible.

The event organised for the By Your Side Appeal consisted of a party held at Connah’s Quay Navy Club in December 2016 which included a disco, live band and raffle. 250 tickets were sold altogether and the total amount raised was £4,131.65. Overall, since Steph and her fellow organisers started the fundraising, they have raised a whopping £55,000 for various charities.

Pali would like to say a big ‘well done’ to Steph and her sisters for all the hard work they put in to their charity events and Pali will continue to support such worthy causes. 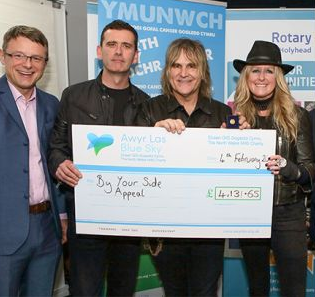 Above; Stuart Lyke presenting the cheque with special guest ‘The Alarm’.