A couple from Newcastle whose property has become flooded on several occasions are taking legal action against the previous owners as they claim a photograph on Facebook proves the issue was known but not reported.

The five-bedroomed property owned by Paul and Hazel Edwards features a beautiful, expansive back garden and was purchased for £750,000 in December 2014.  All was well until the following winter when the couple woke one morning to find their garden had become a lake. 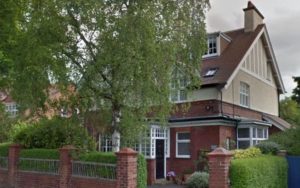 The couple, who own a commercial cleaning company needed to purchase an industrial pump and hose to cope with the huge amount of water.  Several weeks later the garden flooded again.  The couple allege that the property flooded a third time, this time consuming their basement, also. 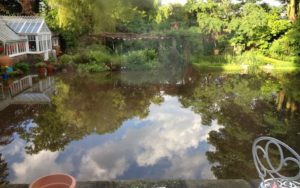 In support of their legal claim, Mr and Mrs Edwards have presented a photograph allegedly published on Mr Corson’s Facebook page in July 2012, which shows the back garden of the property in question flooded, followed by the comment: “Our garden during the deluge.”

A friend had commented: “Maybe you should pull the plug.”
To coincide with the photograph the couple claim to be in possession of a letter sent in December 2012 by Mrs Corson to Kevin Batey, Town Moor Superintendent of Newcastle, claiming that water from Nuns Moor, which backs onto the house had tipped into their garden “like a waterfall”.

A High Court writ issued by their solicitors, BTMK of Southend and quoted by the Mail on Sunday reportedly claims:

“Under the heading “Flooding” the Defendants were asked whether any part of the property (whether buildings or surrounding garden or land) had ever been flooded. To that question, the defendants ticked the box “No”.  ‘The couple is still living in the house but is said to have applied for “rescission on the sale contract”.  They want the Corsons to take the property back and refund them the full amount paid, as well as their mortgage payments and damages for “physical inconvenience and mental distress”.
Presenter of the BBC property show Homes Under The Hammer, Martin Roberts, stated that using the Property Information Form, also known as a TA6 as key evidence in legal proceedings is “extremely rare”.  He said: “The forms have been around for ages but the nature of them has changed. Previously it was for you to volunteer information you felt could affect the value or future of the property. In recent years, they have become a legal part of the sale.  “It is very easy to think you can get away with just ticking these boxes, but you have to answer these things to the best of your ability and truthfully, otherwise, you are misleading the buyer.

“If that information is deliberately misleading and induced someone to buy the property, I’d say you have every right to renege on the sale.”

Groundsure produce an array of reports that contain information on Flooding, as well as other important environmental topics.  Pali also offer a standalone Groundsure Flood Search.
If you would like to know more, please feel free to give one of our friendly team a call on 0800 023 5030