A £1 billion project to install solar panels across social housing in Wales and England has begun in the North West of England.

The program which has been called ‘one of the biggest ever green energy schemes in the UK’, is due for completion over the next 18 months and is estimated to generate upwards of 1,000 jobs, many of which are due to go to veterans from the armed forces.

The government aims to fit a further 800,000 homes with solar panels over the next five years

Around 100,000 households will receive panels in the next 18 months, reducing their energy bills by an average of £240 a year.

Over 40 local authorities and other landlords have already signed up to the program. 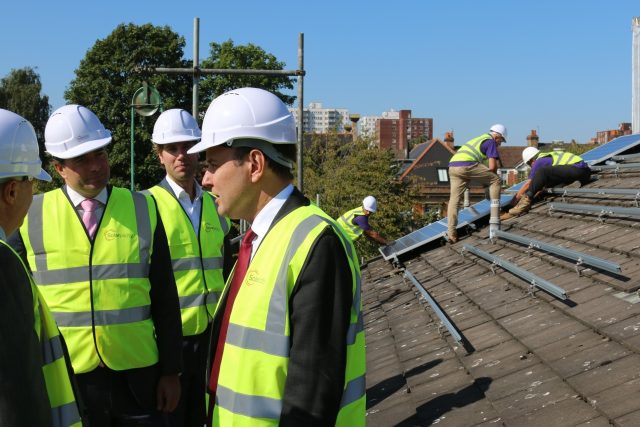 Mr Hands said: “After a record year for new foreign investment into the UK, this initial £160 million capital expenditure program will deliver massive benefits to some of the UK’s poorest households.

“As well as creating 1,000 jobs and delivering cheaper energy bills for up to 800,000 homes, it shows yet another vote of confidence in the UK as a place to invest and do business.”

Tenants in the North West will be the biggest beneficiaries with over 290,000 homes receiving solar panels in towns like Oldham and Bradford, followed by the North East and Midlands, with 184,000 and 154,000 homes from Leeds to Derby.

David Elbourne, chief executive of Solarplicity, said: “Today’s announcement is a reflection of our exciting growth in the energy market, backed by international capital investment through the Department for International Trade.”