A weapons bunker which manufactured ammunition during WWII has been opened to the public for the first time.

The underground munition factory comprises a network of tunnels and cellars and runs below The Palace Amusement Arcade beneath the New Brighton front.

Used by the Ministry of Defence the underground factory employed 200 women and contained an air raid shelter and a base for fire watchers.

The machinery within the bunker is all original and still operational.

“The tunnels were a complete secret and nobody outside of the military or the workers knew of its existence,” says Wirral author and historian Tony Franks-Buckley, who runs Hidden Wirral Myths & Legends.

Tony has big plans for the bunker and adds “I am taking it back to look like it would have done in war time by adding bunk beds and wartime materials.” 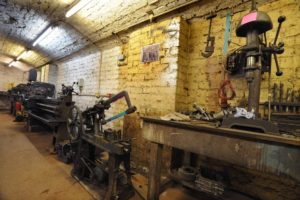 The underground bunker has been opened to the public

Legend has it that wreckers and smugglers stashed their treasure in the labyrinthine tunnels beneath the Palace.  More wormhole like caves can be found under nearby Wellington Road.

The entrance to the bunker can be found via the Creep Inn in New Brighton.

The project will be added to the list of hidden tunnels across the Wirral which includes  Victoria Road, Green Lane, and Bidston Hill.

This and other adventures are run by Hidden Wirral Myths and Legends.