Woman charged for parking on her own driveway!

A homeowner has been issued with parking charges  after receiving a letter from Sefton Council saying she cannot park on her own driveway. The letter explains that because the property does not have a dipped kerb, vehicle access to the drive is considered to go against the Highways Act.

The letter states that in order to park on their drives residents must ‘construct a crossing’. If the homeowner doesn’t comply to this, the council state they would construct the crossing work and the homeowner would be made to recover the cost. Online, the job is quoted to cost around £1,000. 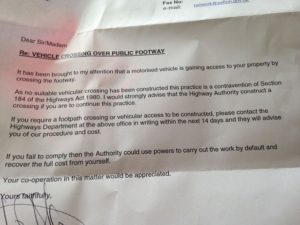 A spokesman for Sefton Council said: “The continuous driving over pavements can lead to the damage of a footway creating uneven surfaces which can also lead to trip hazards.

In this instance the footway outside the property has not been dropped and we have written to the home owner informing them of this while asking them to take necessary corrective action”.

Despite moving in to the property twelve years ago, the homeowner Helen Maloney was unaware she could not park on the drive. She explains, other people who live on the street have also received the same letter. The residents who didn’t receive the letter already have dipped kerbs.