Family forced to turn their home into a shed after losing appeal!

Peter Brown owner of a three-bedroom bungalow near Blairgowrie in Perth and Kinross is being made to return his family home back to its original plan as a shed. 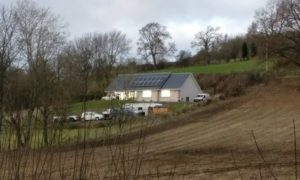 The previous owner of the property George Burke built the bungalow however was given permission to only build a garden shed, residential use was not granted. Mr Burke decided to ignore these regulations and built a three-bedroom bungalow, despite the council objecting against this change of use.

Mr Brown later bought the house and began using it as a family home, until the local council enforced the order that the family must vacate the house within 180 days.

Mr Brown appealed the enforcement set by Perth and Kinross council which stated he must vacate the property, however the Scottish ministers agreed with the local council’s enforcement and the Scottish Government Environmental Appeals Division said the family home must be returned back to a shed as originally granted.

Stephen Hall who deals with appeals for the government stated, ‘I appreciate the possibility that the appellant may have bought and occupied the property without knowing that the residential use was unauthorised.’

‘This possible circumstance does add to the importance of allowing a reasonable time period for compliance with the enforcement notice.’

‘However, I consider that a period of 180 days is adequate to identify alternative accommodation in the Blairgowrie area and agree its purchase or lease.’

Although Mr Hall takes into consideration that Mr Brown may have been unaware of the rejected planning requests made by Mr Burke, he still agrees the enforcement should be made with the given time period in order for the Brown’s to find accommodation to use as a home.

Since the enforcement was issued Mr Brown has applied for planning permission to change the property to an office for business use only and that the house would only serve as a residential property temporarily. Mr Brown then tried to argue that whilst this application was under review there should be no action placed as it could have a negative effect for the new application and how that goes against his rights for a fair hearing, under Human Rights legislation.

Mr Hall didn’t agree with Mr Browns argument and said residents and councillors are against the change of use of the house.

Tom McEwan a SNP Councillor added to such opinions and stated that offices would be ‘impossible to monitor’ and that he felt this was a way for Mr Brown to overcome the planning regulation rules put in place and that the property would still be used for residential use.

The 180 days given to vacate the house was given from the initial rejection date.