Supporting your future developments – Why you should consider a Consultants Report 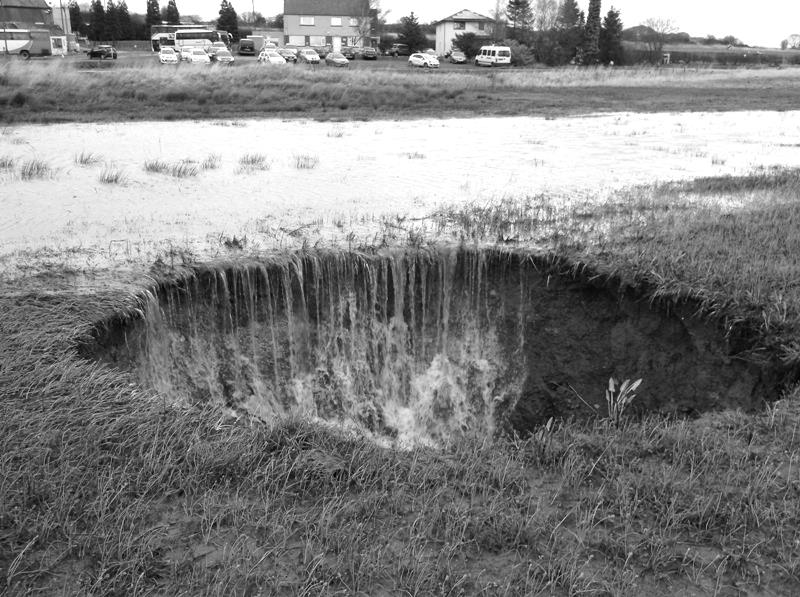 An incident involving the collapse of shallow mine workings in Fife was reported to the Coal Authority‘s 24/7 surface hazards hotline back in 2014.

This particular area of disused land, quite near to a derelict railway line, lied just north of Dunfermline.

The ground collapse was 5 meters deep and around 4 meters in diameter and was caused by mine workings, most probably in the Lochgelly Splint, which were last worked at shallow depth in the 1850s.

The land was heavily waterlogged prior to the collapse being reported, but when the water level reduced, the hole was revealed and as you can see the water was draining into the collapse and exacerbating the problem.

Safety is always our first priority – so we deployed one of our competent contractors; MRS Training & Rescue (formerly known as Mines Rescue Service) immediately to visit the site, who arrived within the hour.

The land in question, as well as a large area surrounding it, had been purchased for a development including residential properties, commercial buildings, local community buildings and open space areas.

We contacted the developer to inform them of the collapse and worked with their permission to undertake the treatment.

Here at the Coal Authority we have an advanced and unique database of coal mining information that always forms part of our investigations.

From the outset, the database will provide us with the details of any known:

For this particular site we had details of coal workings which were very near to the surface and that were over 150 years old.

We could also see that due to the geology of the area, there were coal outcrops where the coal strata was near to the surface and there may have been unrecorded, historic workings.

To treat the collapse, we scheduled the work with our regionally based contractors in Scotland and they used an excavator to further expose the workings and associated voids.

One hundred tonnes of 40mm recycled stone was packed into the void before the topsoil was reinstated and sowed with grass seeds.

A damaged field was also repaired, prior to the final reinstatement, so it did not cause problems in the future.

Our specialist Consultant’s report is available to purchase to assist developers and consultants, by supplying details of:

If you have any questions or would like more information about the Consultant’s report, please contact a friendly member of the Pali team on 0800 023 5030 or send and email to search@paliltd.com.